A lovely tree lined walk, named the Promenade des Acadiens, sits in the heart of Quebec City. The far end of the walk rises to meet the Monument aux Acadiens, accented from across the street by several flags of Quebec that stand proud along the “Promenade des Premiers-Ministres”. The monument in the form of a lighthouse topped by the colours and the star of the Acadian flag is entitled, “Vers la lumiere” (Towards the Light) and is a symbol and reminder of the important role and contributions of Acadians and their descendants in the history of Quebec.

The history of the Acadians is one of great pride for the descendants of the French colony even today in much of Eastern Canada and doesn’t come without some strife. Le Grand Dérangement is a period of history where nearly 12,000 of the 14,000 Acadians were forceably removed by the British to the Thirteen Colonies.

The devastation to Acadians is equal to that of the Scottish people who were removed from their land during the Highland Clearances in the late 18th-early 19th centuries and certainly to that of the Indian Removal signed into law in the US by President Andrew Jackson in 1830 that forceably removed the indigenous peoples of the US from ancestral lands they rightfully owned. Thousands of the 12,000 Acadians forceably removed died along the way, suffering disease and often ending up on boats to the colonies that were lost at sea. A remaining few settled along the eastern seabord and finally in Louisiana where they reestablished their culture, became part of the southern culture, and slowly “Acadien” became “Cajun”, a beautifully rich morphing of an already distinct French culture.

August 15 is known as the Fete Nationale de l’Acadie and is an important reminder of a vital part of Canada’s history and a chapter of Quebec’s history, and indeed North American history, that deserves to be taught and shared more prominently. And its food, music, and culture are something every Canadian should feel proud of. 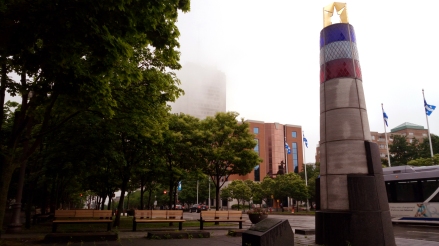 Without some kind of explanation, some fragment of information, the sudden onslaught of photos and talk coming from me about places, history, food and culture of a different city will seem bizarre, so without taking too much of your time, I simply wanted to communicate that we’ve moved from Paris to Quebec City. I requested a renewal for the visa many of you know I was in Paris on and after ten months of deliberation which involved us renewing our extension four times, the Prefecture de Police in Paris decided not to grant me three more years. The details of why, what they said, what their reasoning was and so forth are quite frankly things I am, at least for the time being, done with talking about. We’ve been living this and the leaving France part (which we were given only thirty days to do) for two months now and its weight physically and emotionally have more than overstayed their welcome.

I’ve moved more than once before from one place to another place farther away and the logistics and planning are something I’m ok with, and that my wife and I are quite good at. As long as we get to choose where we’re going, we can be happy enjoying that place together with our feline companion. What I’m not as good at, despite my efforts, is accepting someone telling me I can no longer have the privilege, the honour, and the sincere joy of sitting next to and enjoying the company of people who mean a great deal to me. As it is best expressed in French, “ca me manquera”, which suggests literally “that will be missing from me”. There will perhaps be a blog post at some point reflecting on this partly forced, partly desired move but there are an extraordinary number of things I wanted to start sharing daily as I did in Paris without having to stop and explain what I was doing in Canada repeatedly. So I thought this rather self-indulgent, possibly self-important post was the best way to start. If, which I’d completely understand, Paris related posts were your reason for following me to begin with, don’t feel bad about clicking unfollow or unlike on whatever social media platform you follow me on. It happened with people when I left New York, I expect it to again.

Will the French government’s decision about the visa renewal stop me from completing the screenplay I had started writing in Paris? Not even for one fraction of a second. Can I tell the story I was going to tell in Paris here in Quebec City? As with every other place I’ve filmed and written in, the place will surely find its way into the film as a central character and anyway, as one of my favourite filmmakers David Lean said, “I’m first and foremost interested in the story, the characters”. Except that in my case, not being David Lean or even a passable imitation or shadow of him, I’ll just keep writing the only thing I know how which is characters and making things happen to them and hoping that I stumble across an unintentionally interesting story. The new film will simply be in Canada, where the journey began. Or perhaps, more appropriately in several ways, in la Nouvelle France.

Thanks for reading and following along. A bientot.